Uncut Gems: when opal is the protagonist of a movie 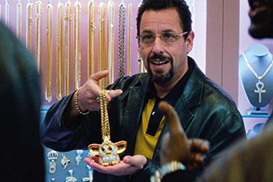 Uncut Gems is one of the most acclaimed films of the last period. A Netflix production featuring Adam Sandler directed by the Safdie brothers. It opens in Ethiopia, amid shouts, blood and exploited miners, at the time of extraction and theft of a gigantic opal which will then be the source of problems in the life of the protagonist Howard Ratner, a precious stone dealer in Manhattan.

The film revolves around a "simple" but precious opal from which it seems we can see the universe: belonging to the silicate family, opals are born from the accumulation and fading of water in pre-existing rocks and stones and are composed of tiny silica spheres grouped in three-dimensional shapes. True, therefore, that show shades of different colors: this material has its most numerous deposits in Australia, South and North America and in the horn of Africa where the rarest variety can be extracted, which Howard wants to place at auction with a $1 million price: the black opal.

The most precious opal in the world is the Olympic Australis, found in the 1950s: it weighs a few pounds and has 17 thousand carats for around one million and seven thousand euros. These gems are rarely put on the market or shown to the public: the most precious raw opal - worth more than half a million - has only been exhibited for a couple of years at the South Australian Museum.

In the goldsmith's shop, in spite of their "psychedelic" effect, the opals still seem to be the exclusive domain for vintage-looking precious items, like the earrings chosen by Elle Fanning in a recent official release and with an imperial rather than Hollywood effect. Among the brands stands out Irene Neuwirth, a Californian brand specializing in opals, pushing only butterflies, tiaras and daisies, and Cartier who has set several in the iconic table clock supported by a black panther.